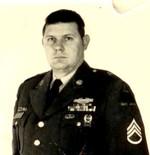 Francis H. Tilghman of Mehoopany died on Tuesday in Tyler Memorial Hospital in Tunkhannock. He was born on April 26, 1943 in Baltimore, Maryland son of the late Arthur L. and Bertha Mae Lockhart Tilghman. He retired from the United States Army. He served in Vietnam with the 7th Calvary along side of Col. Hal Moore. The story of his Company was filmed in the move â€œWe Were Soldiersâ€. 1st Sgt. Tilghman was the recipient of 2 Purple Hearts, Bronze Star and Silver Star. Francis was a member of the Church of Nativity BVM in Tunkhannock, Fr. Francis Perkosky Knights of Columbus of Tunkhannock and a 4th degree Knight of Our Lady of Czestochowa of Luzerne. Francis was the first president of the Fraternal Order of Police Lodge # 50 of Newport News, Va. And one of the founders of the Military Order of the Purple Heart located in Springfield, Va.. Surviving is his wife of 43 years Ruth Lasher Tilghman, son Francis Jr. of Mehoopany, daughter Nancy Marie Wilson of Newport News, Va., brother John J. Crouch of Marshal, Tx., sisters Gertrude Peters of Glen Burnie, Md., Shirley Baker of Katy, Tx., grandsons Michael D. Wilson, Jr., Tony E. Wilson, Greg W. Wilson, Wayne H. Wilson, Dalton D. Wilson and Jeffrey S. Tilghman and 3 great grandchildren. A memorial Mass of Christian Burial will be held on Friday at 11 am from the Church of Nativity BVM in Tunkhannock. Interment of cremated remains will be in Glen Haven Memorial Park, Glen Bernie, Md.. Arrangements by the Sheldon-Kukuchka Funeral Home Inc., 73 W. Tioga St., Tunkhannock.
To order memorial trees or send flowers to the family in memory of Francis H. Tilghman, please visit our flower store.