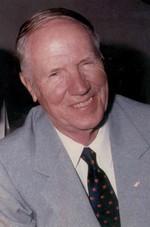 James Piatt Ogden passed away March 21st at The Springs Nursing Home in St. Petersburg, Fla. Born March 4, 1919, in Tunkhannock, he was the son of the late Joseph and Eulalie Piatt Ogden. Mr. Ogden graduated from Tunkhannock High School in 1937. He attended Wyoming Seminary in Kingston and graduated in 1941 from The University of Pennsylvania, where he was a member of Sigma Alpha Epsilon and the University band. He enjoyed playing the trumpet. During World War II, he served as an officer in the U.S. Army. After college and military service, Mr. Ogden worked for many years with Sears Roebuck & Co. He managed several Sears stores in the Northeast, living in Philadelphia, New York and New Jersey. Mr. Ogden retired from Sears in 1975 and became a resident of Meshoppen. He was active with the Meshoppen Fire Company and trained as an emergency medical technician for ambulance service. When spending winters in Florida, Mr. Ogden volunteered at the Veterans Administration Hospital in St. Petersburg for 20 years. Mr. Ogdenâ€™s family was known in Tunkhannock as owners of the distinctive Piatt House, built in Queen Anne style in 1896, at the corner of Tioga Street. Survivors include his wife, Jennis Tewksbury Ogden, a Meshoppen native; his son, James P. Ogden (Jill) of St Petersburg; daughter Cynthia J. Vitters (Raymond) of Hendersonville, N.C.; grandchildren Jeffrey Ogden, Daniel and Holly Vitters; and great-granddaughter Cadence Mackenzie Vitters. Arrangements are pending for a memorial service. Arrangements by Sheldon-Kukuchka Funeral Home, Inc. On line condolences may be sent to www.sheldonkukuchkafuneralhome.com/
To order memorial trees or send flowers to the family in memory of James P. Ogden, please visit our flower store.