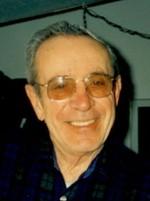 Roger Lewis Glahn passed quietly in Tyler Memorial Hospital, Tunkhannock, PA, on the morning of March 7, 2009. He was 84 years old. Roger was born on July 30, 1924 in Luzerne, PA, the son of William Lewis Glahn and Florence Mae Annear Glahn, and the brother of the late Lora Mae Basciano. He graduated from Luzerne High School (Class of â€™42) and enlisted in the Navy in 1943. He served in the Atlantic fleet including participation in the Normandy invasion of WWII. Upon returning from the war in 1946, Roger was on his way to play professional softball in Wisconsin; however, his plans changed when he met Mary Teresa â€œTessâ€ Pitz of Lancaster, PA. They married in 1949 and recently celebrated their 60th wedding anniversary. Roger was a tradesman, a skilled tinsmith for Armstrong World Industries in Lancaster, PA for 42 years until his retirement in 1990. They were residents of Leola, PA from 1953 to 1995, upon which time they moved to Lovelton, PA to enjoy retirement. Roger was an avid hunter, fisherman and golfer. He was a â€œdo-it-yourselfâ€ type of guy. A man who built his own homes, fixed his own equipment, who always had time to help a friend or neighbor in need. If you went out to dinner with Roger, you had to fight him to pay the tab, and you would seldom win that battle. He was the guy who always bought a round for everyone at the bar. He was known for a big smile, and a firm and sincere handshake. He was a kind and generous man, a great husband, father and grandfather. His family always felt that they came first. Aside from his wife Tess, Roger is survived by his 3 children; Georgine of Hanover Township, PA; Roger of Lovelton, PA; and Raymond of Ithaca, NY. He has 7 grandchildren and 7 great grandchildren. Memorial services will be held on Saturday, March 14th at 10:00AM at St. Anthonyâ€™s Catholic Church in Stowell, and also on Saturday, March 21st at 12 noon at St John Neumann Catholic Church, 601 E. Delp Rd., Lancaster. In lieu of flowers, the family asks that donations be made to the Tunkhannock SPCA, in Rogerâ€™s name. Arrangements by Sheldon-Kukuchka Funeral Home, Inc., 73 West Tioga St., Tunkhannock, PA 18657.
To order memorial trees or send flowers to the family in memory of Roger L. Glahn, please visit our flower store.