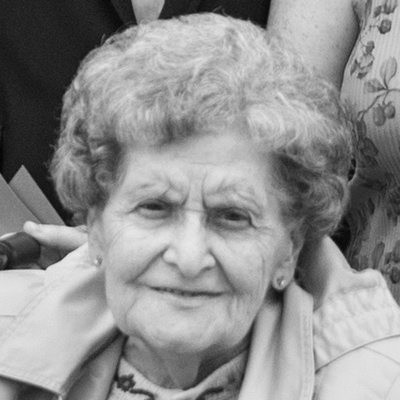 Angie Barkley of Punxsutawney and most recently Tunkhannock passed away peacefully on July 4th with her family by her side just as the 1812 Overture began playing on the television to welcome her to heaven.

She was born December 18, 1928, in Punxsutawney, daughter of the late Joseph and Grace (Spader) Certo.  She was a child of hard-working Italian immigrants and the only daughter among a family of boys. That background enabled her to learn to drive a stick shift, do household repairs (even roofing), and become tough enough to persevere through the many health issues that life would throw at her.

After school she went to work at Means Brothers Construction where she found herself working in the office next to committed bachelor Bob Barkley, recently back from service in World War II.  On July 19, 1952 Angie and Bob were married. They were best friends and constant companions, enjoying over 50 years of marriage until his death in 2005.

She was a loving parent, taxi, homeroom mother, snack provider, cake decorator, and field trip chaperone. She could find any lost baseball in the woods in two minutes after all the players had searched in vain for two hours. When she and Bob became grandparents, they made it their life purpose to spoil grandkids and grand-dogs. Her apple pies and Christmas cookies were legendary. She was an avid quilter and her creations will be passed down through generations.  Angie spent many years as a clerk and bookkeeper for various downtown Punxsutawney businesses. It is safe to say that there was never a penny unaccounted.

She was a member of Saints Cosmas and Damian Catholic Church, Punxsutawney and wore out many pairs of rosary beads over the years.

Angie is survived by her son Bob Barkley and wife Debbie of Tunkhannock, grandchildren Matt Barkley and fiancé April of Florence, KY, and Zach Barkley and wife Amy of Downingtown, PA, sister-in-laws Ann Mumper and Annabelle Certo, and many nieces and nephews.

She was preceded in death by husband Bob and four brothers: Joseph, Peter, Arduine, and Ernest.

A funeral mass will be held at 11 a.m. Saturday, July 14 2018 at Saints Cosmas and Damian Catholic Church, celebrated by Monsignor Joseph Riccardo.

In lieu of flowers, memorial donations may be made to the pet shelter or pet rescue of your choice because Angie never met a dog that did not deserve another treat.

To order memorial trees or send flowers to the family in memory of Angeline C. Barkley, please visit our flower store.