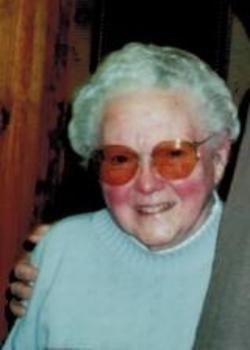 Armistice L. Nahlik Armistice “Dude” Louise Nahlik of Springville died Friday July 5, 2013 in the Tunkhannock Methodist Home, Tunkhannock. She was born in Mehoopany on November 11, 1923 daughter of the late Lloyd and Ellen Atkinson Robinson. Dude lived in Queens Village for 31 years moving to Springville in 1986. She was an active member of St. Peters Episcopal Church in Tunkhannock enjoying many actives through the church. She was an avid Reader and enjoyed sewing and knitting. On November 18, 1944 she married her late Husband Homer C. Nahlik who died on January 15, 1983. She was also preceded in death by 4 sisters and 3 brothers. Surviving are sons Terry Nahlik and wife Carol of East Meadow, LI, NY, Frank Nahlik and Wife Lucille of Burke, Va., brother James Riley Robinson of Russell, Hill, Tunkhannock, 5 grandchildren, 5 great grandchildren and numerous nieces and nephews. Funeral services will be held on Saturday at 11 am from St. Peters Episcopal Church in Tunkhannock with the Rev. Lou Divis. Family will receive friends at Sheldon-Kukuchka Funeral Home Inc. on Friday evening 4 to 7. In lieu of flowers memorial contributions may be made to St. Peters Episcopal Church 3832 SR 6, Tunkhannok, Pa. On line condolences may be sent to the family at www.sheldonkukuchkafuneralhome.com
To order memorial trees or send flowers to the family in memory of Armistice Louise Nahlik, please visit our flower store.