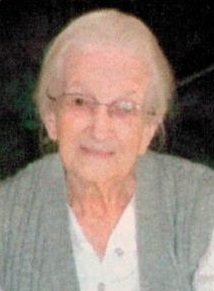 Bernice McCain of Tunkhannock died Monday in Geisinger Wyoming Valley. She was born in Arizona on June 22, 1916. During her life time she worked on the family farm. Bernice was extremely active in the Missionary program of Tunkhannock Pilgrim Holiness Church and taught Sunday school for a number of years. Prior to her retirement she worked as a seamstress at Bocar Manufacturing in Tunkhannock for over 20 years. She was loved and admired by her family and all who knew her. Preceding her in death was her husband Lyman McCain, Brothers Franklin Greenly, Carl Greenly, and Robert Hunsinger. Surviving is a son Paul R. McCain, of Great Bend, daughter Marian Jenkins, Kemper, Texas, Sister Elizabeth Sickler, Tunkhannock , Grandchildren Brenda Walcik, Cheryl Mighell, Todd, Jeff and Michael McCain. 12 Great Grandchildren and 4 Great Great Grandchildren. . Funeral services will be held on Thursday at 11 am from the Sheldon-Kukuchka Funeral Home Inc., 73 W. Tioga St. Tunkhannock with Pastor Joel Byer of the Tunkhannock Pilgrim Holiness Church. Family and friends may call at the funeral home on Wednesday evening from 6 to 8. Those wishing may make memorial contributions to the Tunkhannock Pilgrim Holiness Church, 135 W. Tioga St., Tunkhannock, Pa. 18657. On line condolences may be made to the family at www.sheldonkukuchkafuneralhome.com Thursday February 12, 2015, 11 AM at Sheldon-Kukuchka Funeral Home Click for Map and Directions Wednesday February 11, 2015, 6 PM - 8 PM at Sheldon-Kukuchka Funeral Home Click for Map and Directions
To order memorial trees or send flowers to the family in memory of Bernice McCain, please visit our flower store.