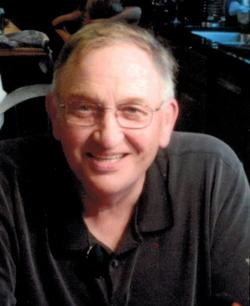 C . Douglas Cooper C. Douglas “Doug” Cooper, 71 of Tunkhannock passed away suddenly on August 21, 2013 at his home. Doug was born in Kingston on August 31, 1941 son of the late Clyde and Gladys Williams Cooper. He was a 1959 graduate of Tunkhannock High School and received a degree in Dairy Science from Penn State University. Doug worked on his Father’s dairy farm, the Forty Fort Dairy, Abbotts Dairy and Crowley Foods. He spent 23 years at Bevaco Food Service and U.S. Food Service as VP of Purchasing. He retired from Maines Food & Paper Service. Doug was a “people person”, and if you met him, you found yourself a new friend. Never one to relax, he retired three more times, before starting his volunteer job at the Tunkhannock Public Library Book Sale Room. Doug was the “Book Man” who delivered books to 20 Out Reach sites that the library serves. In addition to his parents Doug was preceded in death by his sister Polly Lou Spring of FL. Surviving is Doug’s high school sweetheart and wife of 50 years Judy Wynd Cooper, son James and wife Terry Cooper of Springville, daughter Megan and her husband Tony Timonte of Phoenix, AZ, grandsons Bradley Mitchell of SC, Robert, Doug, and Peter Cooper of Springville, sister Priscilla and brother in law Alex Gulis of MI, numerous nieces and nephews. A celebration of Doug’s life will be held on Saturday, August 31, 2013 from 1:00pm – 3:30pm at the Tunkhannock Public Library, 220 W. Tioga St., PA 18657. Services will held at 3:30 at the Library led by Pastor Peter Geschwindner of the Tunkhannock United Methodist Church. In lieu of flowers donations can be made in Doug’s memory to the Tunkhannock Public Library, 220 W. Tioga St., PA. 18657. Memorials will be used for the “Cooper’s Corner Book Sale Room”. On line condolences may be sent to the family at www.sheldonkukuchkafuneralhome.com.
To order memorial trees or send flowers to the family in memory of C. Douglas Cooper, please visit our flower store.