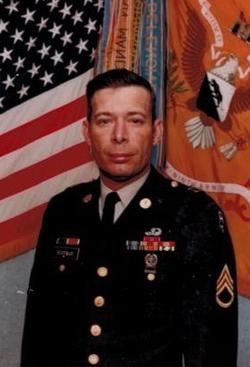 Charles F. Huffman, Sr., of Tunkhannock, died at his home on Thursday July 17th. He was born in Sayre PA on May 17, 1941 son of the late Lawrence H. and Rowena Foster Huffman. He was a 1960 graduate of Towanda High School and retired in 1980 after serving in the United States Army for 21 years with the rank of Staff Sargent having served multiple tours in Vietnam. He later was employed at the Tobyhanna Army Depot for 18 years where he served in numerous countries. He was a member of the 82nd Airborne Association. Charles is predeceased by a sister, Barbara J. Crawford. Surviving is his wife of 50 years Carolyn Gorsuch Huffman. Also surviving are son’s Charles F. Jr and Lawrence P. and wife Shirley all of Tunkhannock, Darrell and fiancee LaDonna Reynolds of Oak Grove KY; one daughter Carol Lynn Huffman of White Haven, one sister, Regina L. Carrington of Milan PA. and grandchildren Shirley, Lawrence Jr, and Mae Huffman all of Tunkhannock and Mariah McHugh of Carbondale. Funeral services will be held on Monday July 21st at 11 am from Sheldon-Kukuchka Funeral Home, 73 W. Tioga Street with Pastor Joel Byer of the Tunkhannock Pilgrim Holiness Church. Interment will be at the convenience of the family. Family and friends may call at the funeral home on Sunday July 20th from 5 to 7 pm. Online condolences may be sent to the family at www.sheldonkukuchkafuneralhome.com. Monday July 21, 2014, 11:00 AM at Sheldon-Kukuchka Funeral Home Click for Map and Directions Sunday July 20, 2014, 5:00 - 7:00 at Sheldon-Kukuchka Funeral Home Click for Map and Directions
To order memorial trees or send flowers to the family in memory of Charles Huffman, please visit our flower store.