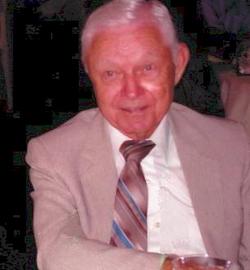 David P. Rowker David P Rowker of Laflin Jenkins Township and Boca Raton, FL passed away on Tuesday, May 27th at Commonwealth Hospice of NEPA in Scranton. He was born in Laflin Jenkins Township on March 1, 1924 son of the late Peter and Anna Leck Rowker. He was a 1942 graduate of Jenkins Township High School and served in the United States Navy for 11 years. Prior to his retirement he was the owner of the Rowker Dress Company in Tunkhannock and Ronax Dress Company in Noxen. He was a devote Catholic and a member of St Mary’s Byzantine Church in Wilkes-Barre and served as a Cantor at Our Lady of the Sign Byzantine Catholic Church in Coconut Creek FL. David was an avid golfer, developing his skills while serving in the United States Navy in Japan. Dave used his talents with a scroll saw to create numerous wooden churches crafted from white birch and other selected woods. He also created numerous clocks with the most intricate of designs. Several of his designs were donated to local churches and monasteries to be auctioned off at their summer festivals. David was part of a band called the Rhythm Makers in which he played the saxophone for a number of years. He played an intricate part in establishing the Carmelite Kitchen at the Holy Annunciation Monastery and donated the convection oven which the nuns used to bake their breads. He was preceded in death by a brother Paul Rowker. Surviving are two sisters: Veronica Timchack of Laflin and Mary Kukuchka of Tunkhannock as well as several nieces, nephews and great nieces and nephews. Funeral services will be on Saturday at 10 am with Office of Christian Burial with Divine Liturgy at St Mary’s Byzantine Catholic Church in Wilkes-Barre with the Very Reverend James G. Hayer, Pastor. Interment will be in St Mary’s Byzantine Cemetery in Dallas, PA. At David’s request there will be no calling hours. Relatives and friends are asked to go directly to the church. In lieu of flowers memorial contributions may be made to St Mary’s Byzantine Catholic Church, 695 North Main St., Wilkes-Barre, PA 18705. Arrangements by Sheldon-Kukuchka Funeral Home, 73 W. Tioga St. Tunkhannock, PA. For directions and to sign the guest book, please visit www.sheldonkukuchkafuneralhome.com.
To order memorial trees or send flowers to the family in memory of David P. Rowker, please visit our flower store.