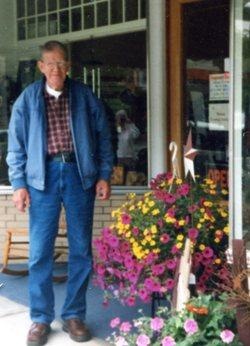 Donald H. Pennay Donald H. Pennay of Tunkhannock died Saturday December 21, 2013 in the Golden Living Center in Tunkhannock. He was born in Wyalusing on June 14, 1932 son of the late Hartley and Mary Sine Pennay. Donald was an Army veteran serving with the 109th Infantry in Germany. He had been employed by Sylvania in Towanda for over 28 years and after retiring from there he started Don’s Produce delivering to numerous local restaurants’ for over 10 years. Surviving is his wife of 59 years Sylvania Supeck Pennay, daughter and husband Linda and Gary Custer of Tunkhannock, sisters Marie Thinglestad of Kansas, Jean Sands and Alice Sherwood both of Meshoppen, Irene Shiffer of Tunkhannock, grandchildren, Brittany Schmidt, Wesley and Jenna Custer of Tunkhannock, great grandchildren Jerry Allen Schmidt III and Zoe Schmidt. A memorial service will be held on Saturday January 4, 2014 at 2 pm from the Sheldon-Kukuchka Funeral Home, Inc. 73 W. Tioga St. Tunkhannock with Rev. Gil Clark Pastor of the Russell Hill United Methodist. Friends may call at the Funeral Home from 1 pm until the time of service. Those wishing may make memorial contributions to the Russell Hill United Methodist Church. On line condolences may be sent to the family at www.sheldonkukuchkafuneralhome.com.
To order memorial trees or send flowers to the family in memory of Donald Pennay, please visit our flower store.