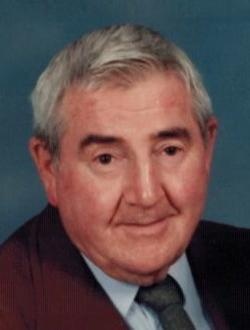 Donald T. Sherry of Tunkhannock died Wednesday in Tyler Memorial Hospital in Tunkhannock. He was born in Wilkes-Barre on August 7, 1920 son of the late Thomas and Anna Daniels Sherry. Don was a graduate of E.L. Myers High School class of 1939. He served as a Sergeant in the Army Air Force in World War 2 serving in, North Africa, Sicily and Italy. Prior to his retirement Don was employed as a salesman for Glanz, Behm and Herring in Forty Fort and for Penna. Supply Co. serving as a salesman for Wyoming, Sullivan, Susquehanna and Bradford Counties. He was a member of the Tunkhannock United Methodist Church. Preceding him in death was a son Thomas D. Sherry in 1975. Surviving is his wife of 66 years Jane Lewis Sherry, sons Robert and Mary Sherry of Lake Winola, David Sherry of Tunkhannock, daughter Donna and Will Valvano of Tunkhannock, brother James Sherry of Honesdale, 7 grandchildren, 4 great grandchildren, nieces and nephews. Funeral services will be held on Saturday at 11 am from the Sheldon-Kukuchka Funeral Home Inc., 73 W. Tioga St., Tunkhannock with Pastor Peter Geschwindner of the Tunkhannock United Methodist Church. Interment will be in Sunnyside Cemetery, Tunkhannock. Friends may call at the funeral home on Friday from 6 to 8. Those wishing may make memorial contributions to the Tunkhannock United Methodist Church. On line condolences may be sent to the family at www.sheldonkukuchkafuneralhome.com
To order memorial trees or send flowers to the family in memory of Donald T. Sherry, please visit our flower store.