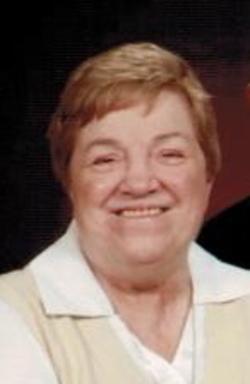 Esther S. Thomas 77, of Tunkhannock died Sunday morning, March 2nd, at the Golden Living Center in Tunkhannock. She is survived by her husband Raymond Thomas; they would have celebrated their 55th wedding anniversary in May. She was born September 25, 1936 in Scranton daughter of the late Anthony and Helen Balla Kudalsky. Esther worked for the Tunkhannock Area School District as an Aide for 27 years. She was preceded in death by her brother Anthony Kudalsky Jr. She is survived by her daughters Bonnie McSherry and husband Jack, of Conestoga, PA, Laurie Parry and husband Rob, of Tunkhannock, brother Wallace Kudalsky, of Dalton, sister Shirley Kudalsky, of Troop, grandchildren Thomas and Robert Parry IV, of Tunkhannock, Amanda and husband Jeremiah Case, of Tunkhannock, Christina McSherry, of Lancaster, great grandchildren Parker Case, and Sophia McGovern. Funeral services will be held Friday, March 7th, at 11:00 AM from the Tunkhannock United Methodist Church with Pastor Peter F. Geschwindner presiding; interment will be in Sunnyside Cemetery, Tunkhannock. Friends and family may call at the Sheldon-Kukuchka Funeral Home, Inc. 73 West Tioga St. Tunkhannock Thursday evening from 5:00 PM to 7:00 PM. The family would like to thank the Golden Living Staff for all the love and care they gave to Esther. In lieu of flowers please send Memorial Contributions to the Tunkhannock United Methodist Church, PO Box 447, Tunkhannock, PA 18657 in Esther’s name. For directions and on line condolences please visit www.sheldonkukuchkafuneralhome.com. Thursday March 6, 2014, 5 PM - 7 PM at Sheldon-Kukuchka Funeral Home Click for Map and Directions Friday March 7, 2014, 11 AM at Tunkhannock United Methodist Church Click for Map and Directions
To order memorial trees or send flowers to the family in memory of Esther S. Thomas, please visit our flower store.