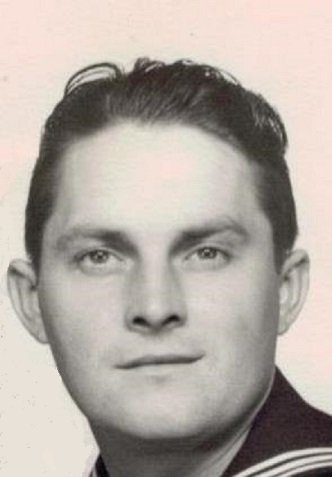 Frank A. “Fritz” Ambrutis of Tunkhannock died Thursday in the Golden Living Center in Tunkhannock. He was born in Duryea, Pa on July 17, 1917 son of the late Frank Ambrutis and Margaret Kristunas Ambrutis Egliskis, and step son of the late Andrew Egliskis. He was a graduate of Tunkhannock High School class of 1938. Fritz was a Navy veteran of WW2, during his time after the end of hostilities; he was witness to an atom bomb test on Bikini Atoll. After being discharged from active duty, he was later reactivated for the Korean Conflict. He received his Honorable Discharge in 1951. Prior to his retirement, he was employed by the US Postal System in the Tunkhannock Post Office for over 20 years. After his retirement, he and Agnes spent many weeks and months tending their garden on “The Hill”, their bit of heaven on Lane Hill. He was a member of the Church of the Nativity BVM, in Tunkhannock, its Holy Name Society and a member of the Fr. Francis Perkosky Knights of Columbus #5942. He was preceded in death by his wife Agnes Stroka Ambrutis, sons Mark and Frank Ambrutis, and a daughter Beth Bluhm; Half-brothers Paul and Bill Egliskis, and Half-sister Connie Heffering. Surviving is a son John and wife Jan Harding Ambrutis of Tunkhannock, half-brother Donald Egliskis of Dallas, and half-sister Jean Kovalakas of Vestal, NY. Fritz has 4 grandchildren, 10 great grandchildren and 2 great great grandchildren, as well as numerous nieces and nephews. A mass of Christian Burial will be held on Wednesday, March 16 2016 at 11 am from the Church of the Nativity BVM in Tunkhannock. Interment will be in Mt. Carmel Cemetery, Tunkhannock. Family and friends may call at the church from 9:30 am until the times of service, Arrangements, by the Sheldon-Kukuchka Funeral Home Inc. Tunkhannock, PA. On line condolences may be sent to the family at www.sheldonkukuchkafuneralhome.com. In lieu of flowers, please make a remembrance to any veteran’s organization of your choice.
To order memorial trees or send flowers to the family in memory of Frank A. Ambrutis, please visit our flower store.