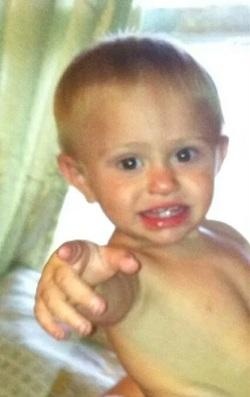 Gage Anthony Wells Gage Anthony Wells, age 17 months, of Mehoopany died Monday, August 11 at Tyler Hospital in Tunkhannock. He was born in Wilkes-Barre on March 3, 2013 son of Parents Jordan Wells and Tiffany Rettberg, of Mehoopany. At this time of our great loss of this little man, the family would like to thank everyone for their kindness and support...We will always Love and miss you Gage Anthony Wells...You will stay in our Hearts Forever.. Fly High Little Angel..... He was preceded in death by his Grandparents Ralph and Virginia Wells, and Uncle Jason Clark, He is survived by his brother Dakota Wells of Mehoopany, his Maternal Grandparents Tabatha Clark Rettberg and the late Karl Rettberg of Forest City, his Paternal Grandparents David and Step grandmother Tina Wells of Mehoopany, and Terri and Step grandfather John Mandigo of Taylor, Pa, Paternal Great Grandmother Linda Rose, of Montrose, and Ruthann Fowler, of Mehoopany maternal great grandparents Lillian Howard, Karl Rettberg Sr. and Robert Morrison of Forest City, Aunts Brittany Poma, Carissa and Husband Robert Slater, Bethany and husband Brandon Cheek, Megan Rettberg, Tabby Rettberg, and Uncle John Maloney, numerous Great Aunts Uncles and Cousins. Funeral services will be held on Thursday at 2:00 PM from the Sheldon-Kukuchka Funeral Home Inc. 73 West Tioga St. Tunkhannock with Pastor Joel Mitchell interment will be held at the convenience of the family. Friends and Family may call at the funeral home on Thursday from 1:00 PM until the time of the service. Memorial contributions can be made in Gage’s name at any P&G Federal Credit Union.
To order memorial trees or send flowers to the family in memory of Gage A. Wells, please visit our flower store.