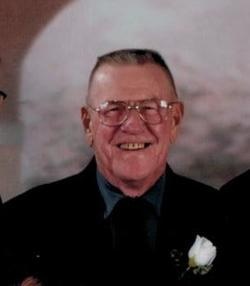 George M. Offshack of Sugar Hollow Road, Tunkhannock died Thursday in Geisinger Wyoming Valley, Plains. Surviving is his wife of 62 years Louise Sakoski Offshack. He was born in Wilkes-Barre on August 23, 1926 son of the late George and Mary Montville Offshack. He attended Coughlin High School in Wilkes-Barre and was an Army veteran serving Pacific Theater during WW2. Prior to his retirement George had been employed as an Aviation Machinist for 20 years and later retired from the Procter and Gamble Plant in Mehoopany where he worked as a machinist for over 20 years. He enjoyed his retirement working on his beloved farm in Sugar Hollow with his Apple Orchard and Christmas Trees. He was preceded in death by a brother Edward Offshack. Surviving are sons George, of Limerick Lake, Ontario, Canada, Edward of Cincinnati, Ohio, Christopher and wife Emily of Kingston, Ontario, sister Josephine Offshack of Wilkes-Barre, grandchildren Bethany and Jeffrey Offshack of Knoxville, Tenn, great grandchildren Caleb and Joshua Offshack of Knoxville, Tenn. Funeral services will be held on Tuesday, May 28th at 11 am from the Sheldon-Kukuchka Funeral Home Inc. 73 W. Tioga St., Tunkhannock with Deacon Raymond A. Pieretti of the Church of the Nativity BVM in Tunkhannock. Interment will be Mount Olivet Cemetery, Carverton. Friends may call at the Funeral Home on Monday evening 5 to 7. On line condolences may be sent to the family at www.sheldonkukuchkafuneral.com.
To order memorial trees or send flowers to the family in memory of George M. Offshack, please visit our flower store.