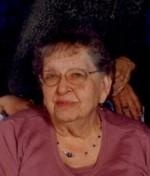 Grace A. LaBar, 85, of Tunkhannock, passed away Tuesday, March 3, 2009, at the Golden Living Center, Tunkhannock. She was born September 6, 1923, in Tunkhannock, daughter of the late Wesley and Minnie (Sands) Miner. Grace worked at GLF in Tunkhannock for many years. She was an accomplished seamstress and a talented baker. She and her late husband, Earl, celebrated their 62nd wedding anniversary on August 4th, 2006. Besides her husband and parents, she was preceded in death by brothers, Cecil, Wilson, Ray, Herbert and Robert Miner. Surviving are son and daughter-in-law, William and Donna LaBar, Tunkhannock; daughter and son-in-law, Linda and Larry Twordusky, Tunkhannock; three granddaughters, Lori Woronko, Tunkhannock; Amy Helminiak, East Canaan, CT; and Monica LaBar, Tunkhannock; one great granddaughter, Megan Woronko, Tunkhannock; several nieces and nephews. Funeral services will be held on Saturday at 11 a.m. from Sheldon-Kukuchka Funeral Home, 73 W. Tioga St., Tunkhannock, with Rev. Thomas Mott, Russell Hill United Methodist Church, officiating. Friends may call from 10:00a.m. until the time of the service. Interment will be in Sunnyside Cemetery. For directions and on line condolences go to www.sheldonkukuchkafuneralhome.com In lieu of flowers, memorial donations may be made to the Tunkhannock Public Library, 220 W. Tioga. St., Tunkhannock, PA 18657.
To order memorial trees or send flowers to the family in memory of Grace A. LaBar, please visit our flower store.