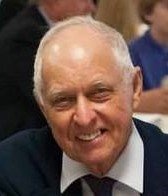 Harold John Montross “Moon”, 82, died on June 26th  peacefully in his sleep in his home of 47 years in Centermoreland, Pennsylvania.  He was surrounded by his wife of 57 years, Doris (Motichka) Montross, and most of his 8 children.

Harold was born on March 5, 1936, to John and Ida Montross on his beloved farm in Tunkhannock, Pennsylvania.  As high school sweethearts, he and wife Doris settled into their life and soon afterward Harold, an Army Veteran, joined the International Union of Operating Engineers, Local 542.  His career with the Union spanned 60 years!  He played an integral part in the construction of the Joyce Pipeline, the Pennsylvania Turnpike Northeast Extension, the Berwick Nuclear Powerplant, and the Runway Extension of the Wilkes-Barre/Scranton International Airport.

An avid outdoorsman, Harold enjoyed hunting with his sons, riding motorcycles and snowmobiles, and “tinkering” on his tractors and bulldozers at his farm.  He too was a Yankee fan!

Harold was active in the Nicholson Lodge No. 438 F.& AM and with The Irem Shrine and other Masonic organizations.

Harold is preceded in death by his parents, his sister Betty (Montross) Dymond and his brother Wayne Montross.

A Worship service will be held on Thursday June 28th at 6pm at the Northmoreland Baptist Church in Centermoreland.  The burial will be private. Visitation will be held at the church from 4pm to time of service.

To order memorial trees or send flowers to the family in memory of Harold J. Montross, please visit our flower store.