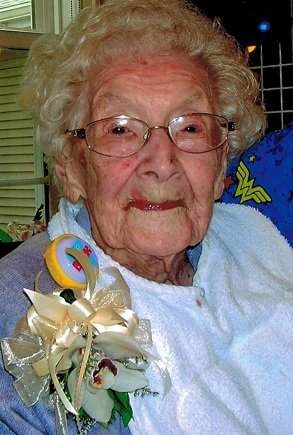 Life Legacy Hazelle Allen Brooks, 103, of Mehoopany passed away peacefully surrounded by family at the Tunkhannock Manor. She was born in Mehoopany on May 21, 1912, a daughter of the late Howard and Essie (Comstock) Allen. She was active and alert until a few months ago. She was married to the late Foster Robinson Brooks for 63 years before his death in 2005. Also preceding her in death was her sister Marian Allen and her daughter Martha Brooks. She received her teaching degree from Dickenson College and was a teacher at the Mehoopany High School. After raising her family, she returned to school and received her Master’s degree in Library Science from Marywood College, and became the Tunkhannock Area High School Librarian from 1953 to 1980. She and her husband gave slide shows to the community of their travels and of Mehoopany area history. She was a member of the Daughters of the American Revolution, the Mehoopany Methodist Church, and was a charter member of the Wyoming County Historical Society. In addition, she co-authored a book on the history of the Mehoopany School and was active in the Culver family reunions. She relished her time spent reading as well as writing poems. Surviving are children Mildred (Charles) Grime of Sebring, Florida and Allen (Donna) Brooks of Tunkhannock; grandchildren Ric McNeill of Atlanta, Georgia; Nora Weder of Lancaster; and Timothy (Judi) Brooks of Bethlehem; great-grandchildren Cody and Trevor McNeill; Jared Brooks; Christian, Joshua, Casey, and Bradley Weder; and nephew Lynn Brooks of Tunkhannock. Also surviving are cousins, nieces, nephews. Church services will be held at the Mehoopany Methodist Church on Monday, July 20, 2015 at 1pm. Internment at Vaughn Cemetery will be at a later date at the convenience of the family. Visitors are invited on Sunday, July 19, 2015, from 5-7pm at the Sheldon-Kukuchka Funeral Home, 73 West Tioga Street, Tunkhannock. Many thanks to the staff at the Tunkhannock Manor, Hospice of the Sacred Heart, and Dr. Christopher Andres for their tender kindness and excellent loving care. Memorial contributions may be made to the Mehoopany Methodist Church or to the Wyoming County Historical Society. Online condolences may be sent to the family at www.sheldonkukuchkafuneralhome.com.
To order memorial trees or send flowers to the family in memory of Hazelle Allen Brooks, please visit our flower store.