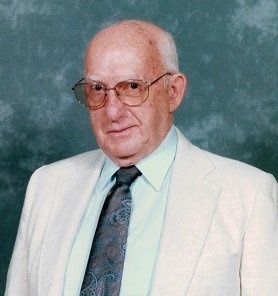 Howard D. Trauger 89, a life time resident of Lake Winola died at his home on Sunday. Preceding him in death was his wife Geraldine Jacques Trauger who died on January 23, 2011. He was born in Lake Winola on February 7, 1926 son of the late Carl and Mabel Hancock Trauger. Howard was a 1943 graduate of Falls Overfield High School and a Navy Veteran of WW2 serving in the Caribbean on the USS Lark (AM-21). Prior to his retirement he and his late wife were the owners and operators of Trauger’s Hardware, Propane Gas and Oil Services in Mill City for 40 years. He also served on numerous boards in Lake Winola and Tunkhannock Area and should be remembered for his generous support to numerous community actives and projects. He and Gerry enjoyed wintering at their condo in Gulf Port Fla for many years. He was preceded in death by brothers Harold, Warren and Robert Trauger and his K-9 Companion Kharma. Surviving are numerous nieces, nephews, and great nieces and nephews and great-great nieces and nephews. The family would like to thank Caregivers Sandra Palmer and Kpete Talboussouma, Hospice Advantage and special friend Ed Ultsh and neighbors Carol and Joe Oliver. Funeral services will be held on Wednesday at 11 am from the Lake Winola United Methodist Church, Maple Lane, Lake Winola PA 18625 with Pastor Gay Irwin, Deacon Raymond Pieretti and Pastor Bob of Hospice Advantage. Friends may call at the church from 10 am until the time of the service. Interment will be in Sunnyside cemetery with a military graveside service. In lieu of flowers memorial contributions may be made to the Lake Winola United Methodist Church, PO Box 400, Lake Winola, PA 18625, or to the Lake Winola Fire Department, PO Box 73, Lake Winola, PA 18625. Online condolences may be sent to the family at www.sheldonkukuchkafuneralhome.com.
To order memorial trees or send flowers to the family in memory of Howard D. Trauger, please visit our flower store.