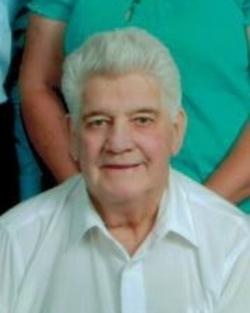 John E. Targett of Lake Winola passed away Saturday October 5th at the Inpatient Hospice Unit at Regional Hospital of Scranton. Born in Flagstaff, Maine on January 15, 1942 he was the son of the late Erwin and Annette (Murray) Targett. John lived in Lake Winola for 40 years. He loved to fish and hunt and always looked forward to his trips to Canada with his family and friends to fish for Walleye. He was a very proud, caring, and thoughtful man who loved his family and friends. Everyone who came in contact with him was touched by his kindness. John always lended a hand to his friends and family whenever they needed him. He was a devoted husband, father, grandfather, brother, and friend. He will be greatly missed by many. John proudly served his country as a Medic in the United States Air Force from January 1959 to January 1963. He worked for Wyoming Sand and Stone until he retired in 2000. John is survived by two sons, Matthew Targett and his wife Trine of Beijing, China; Patrick Targett of Lake Winola, PA and a daughter, Janine Targett of Falls, PA. He was blessed with four grandchildren; Hayley, Ava, Ethan, and Stella. Also surviving are sisters; Dorothy King of Mill City, PA; Diane Pelkey of Liverpool, NY and brothers; Herbert (Mike) Targett of Brick, NJ; Edwin (Ted) Targett of Stratton, ME; David Targett of Farmington, ME; Victor Targett of Wilton, ME and Donald Targett of New Gloucester, ME. as well as several sisters-in-law; brothers-in-law; and nieces and nephews. He is predeceased by his brothers, Erwin Targett Jr. and Hugh Targett and a sister, Mildred Milliken. He was preceded in death by his beloved wife of 50 years, Tess (Maryann) Cleaver Targett on August 5. He now joins her in heaven for another dance. A mass of Christian burial will be held on Friday at 9:30 am at St. Mary’s of the Lake, Lake Winola. Friends are asked to go directly to the church. Interment will be at the convenience of the family. Friends and family may call on Thursday from 5 to 8pm at the Sheldon-Kukuchka Funeral Home, 73 W. Tioga St., Tunkhannock. Memorial contributions in John’s name can be sent to either Hospice of the Sacred Heart, 600 Baltimore Dr., Wilkes-Barre, PA 18701 or to the American Cancer Society, 712 S. Keyser Ave., Taylor, PA 18517. To send online condolences, please visit www.sheldonkukuchkafuneralhome.com.
To order memorial trees or send flowers to the family in memory of John E. Targett, please visit our flower store.