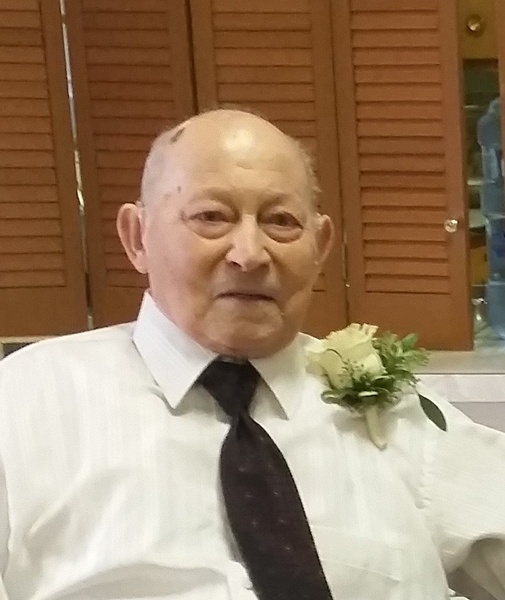 Joseph F. Ignatovich of Falls died at his home Friday, March 9th.  He was born in Duryea on Sept. 20, 1930, son of the late John and Anna Franko Ignatovich. He was a graduate of Duryea High School and an Army veteran of the Korean Conflict. Before his retirement, he was employed for more than 30 years by Wyoming Sand and Stone. He was an active member of St. Mary’s of the Lake Church.

Joe was known for his generosity and he found joy in making others happy. This was reflected in the happiness he shared playing Santa for many church functions as well as for family and friends. Family was the center of Joe’s life. Together with the love of his life, Ceil, he was delighted in being surrounded by his children, grandchildren and great-grandchildren.  Anyone who ever had the chance to speak with him knows how he loved to share his stories. He enjoyed gardening and spent many hours taking care of his yard, flowers and fruits and vegetables and loved sharing them with family and friends. He loved taking and sharing photographs, as well as painting, and many people were recipients of his photos and paintings. He won a number of ribbons at the Wyoming County Fair for his painted saws and milk cans. He also enjoyed fishing, hunting and bowling was a weekly ritual. He was an enthusiastic fundraising participant in Bowl for Kids Sake. Joe was an accomplished musician, playing for many years as a drummer with his band, the Futuresques, which performed at numerous social functions. He could be regularly found with his wife at many church picnics and quilt bingos throughout the area where he was known as “Mr. Lucky.”

Also preceding him in death was a daughter, Renee Furman; brother, Albert; and sisters, Lucille Polak and Charlotte Salitis.

Funeral services will be held Tuesday at 9 a.m. from the Sheldon-Kukuchka Funeral Home Inc., 73 W. Tioga St., Tunkhannock, with a funeral Mass at 10 a.m. at St. Mary’s of the Lake Church, Lake Winola. Interment will be in Sunnyside Cemetery, Tunkhannock.

Family and friends will be received at the funeral home Monday from 6 to 8 p.m.

Those wishing may make memorial contributions to St. Mary’s of the Lake.

To order memorial trees or send flowers to the family in memory of Joseph Francis Ignatovich, please visit our flower store.

St. Mary's Of The Lake