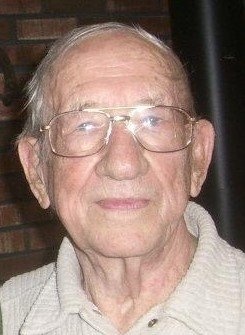 Kenneth W Evans passed away on December 17, 2017, surrounded by family. He was 95 years old. Ken is survived by his wife of 68 years, Lee (nee Urganus) Evans, daughter Suzanne and her husband Craig, daughter and caregiver Connie and her husband Dennis, son Kenneth and his wife Pam, son Chris and his wife Kathy. Ken is also survived by eleven grandchildren Shawn and Michele, Jennifer, Melissa and Sarah, Scott and Robert, Kristina, Jessica, Bryan and Danny, and twelve great-grandchildren.

Ken was born in Birmingham, England to Fred and Lilian Evans on March 8, 1922, coming to the states in 1927 and settling in Plymouth, PA. Ken served his country as a landing craft driver in the Army during World War II in the Pacific Theater. Ken and Lee raised their family in West Orange, NJ where Ken worked as a horologist (a clock repairman) for Calculagraph and Company. After retiring, Ken and Lee settled into the cabin they spent years building, on the Susquehanna in Tunkhannock, PA.

Ken volunteered for many years with the American Red Cross, West Orange First Aid Squad, AARP and the Tunkhannock Senior Center. He served as the Exalted Ruler of the Orange Elks Lodge #135 and was a member of the VFW in West Orange.

Ken was lovingly known as “Pop” to most everyone who knew him. Pop could make a friend anywhere he went, telling stories and jokes to anyone who would listen. He preferred his beer warm, enjoyed polka, and loved his family unconditionally. Pop loved to fix and fiddle with things until they were working again. His famous exit line at any get together was always, “What did the hat say to the hat rack? – You stay here, I’ll go on a head.”

He lived a full life and we are all blessed to have had him in our lives for as long as we did.

Memorial services to be held at a later date.

To order memorial trees or send flowers to the family in memory of Kenneth W. Evans, please visit our flower store.