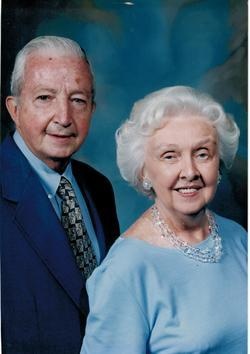 Kenneth and Janice Lewis, of Tunkhannock died tragically in a motor vehicle accident on Wednesday, October 15, In Monroe Twp. Kenneth 84 was born in Plymouth on July 25, 1930 son of the late Harold and Helen Jones Lewis. Janice Llewllyn Lewis 84 was born in Wilkes-Barre on February 1, 1930 daughter of the late Harold and Beatrice Hill Llewllyn. Ken graduated from Plymouth High School and then earned a degree from the Merchant Marine Academy. He continued his education at Temple where he earned his teaching certification. Mr. Lewis began his teaching career at West Pittston High School, eventually taking a position at Wyoming Seminary. Mr. Lewis spent the majority of his time teaching as a Professor of Physics at Luzerne County Community College beginning at its inception and continuing years until his retirement in 1993. Mr. Lewis was a Naval Reserve Officer at the Avoca National Reserve where he attained the rank of four star Captain in the Navy. Jan Lewis graduated from Myers High School in Wilkes Barre. She attended Cedar Crest College earning a Masters of Science and Education. She started her career at Lewistown High School then moved to West Pittston when they married. Jan Taught 8th grade science at Wyoming Area School District until her retirement in 1993. Janice also participated in the West Pittston Junior Women’s Club. Upon their retirement they moved from West Pittston to the log cabin they built in 1972. It was here they spent the best years of their lives surrounded by their beloved grandchildren . They became active members of the community, volunteering for the Tunkhannock Public Library and the National Alliance of Mental Illness (NAMI). Janice once again became active in the Tunkhannock Senior Women’s Club. They traveled on many “hostels” with good friends and loved to play Bridge. Perhaps their greatest joy was the time they spent with their family. They loved that the family was close by and enjoyed participating by attending sporting events and dance recitals. They celebrated their 60th Wedding Anniversary this past Summer. “Here, here!” They loved and lived their lives to the fullest in their cabin in the woods. Donations can be made in their honor at the Seven Loaves Soup Kitchen in Tunkhannock, or to The Gift of Life Family House Donor Program in Philadelphia. Kenneth was preceded in death by a sister Margie Hankanson. Kenneth and Janice are survived by Son Robert Lewis and companion Marlene Ladner, of Tunkhannock, daughters Laura and husband Joseph Charles, of Tunkhannock, Leann Danko and husband Don Puterbaugh, of Tunkhannock, sister Virginia Liewllyn August, of CT, Grandchildren John, and wife Lana, Michael, and Steven Danko, of Tunkhannock, Kathlyn Charles Fisherand Husband Steven, Melissa and Adam Charles, great-grandson Carter Fisher, Jeremy, Jenny and Mathew Puterbaugh. Funeral services will be held on Monday October 20th at 11:00 AM from the Tunkhannock United Methodist Church interment will be held in Fern Knoll Cemetery in Dallas. Friends and family may call at the Sheldon-Kukuchka Funeral Home, Inc. 73 West Tioga St. Tunkhannock on Sunday October 19th from 4:00 PM to 8:00 PM. For directions and on line condolences please visit www.sheldonkukuchkafuneralhome.com
To order memorial trees or send flowers to the family in memory of Kenneth & Janice Lewis, please visit our flower store.