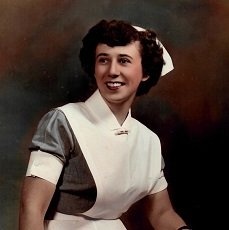 Lois A. VanHorn 86, of Dalton, PA. Died Sunday July 22nd at Geisinger CMC in Scranton. She was born on November 13, 1931 daughter of the late Herman and Mary A. Plossil Rush.

She is survived by her husband of 65 years Milton VanHorn.

She graduated from Belvidere High School, and Easton Hospital School of Nursing, and later went on to receive her Masters in Nursing. She then worked in New Jersey and then came to Pennsylvania where she was the Head of the Wayne Memorial Home Health. Louis and her husband Milton owned and operated The Prince Hotel in Tunkhannock for many years until retirement.

She was preceded in death by her son Craig VanHorn and grandson Brian Deighton.

She is survived by her son Keith, of Dalton, daughter Coralee Deighton, of Carbondale, sister Marie Rush Sweet, 6 Grandchildren, 5 Great Grandchildren and several nieces and nephews.

Funeral services will be held on Thursday July 26th at 1:00 PM from the Sheldon-Kukuchka Funeral Home, Inc. 73 West Tioga Street Tunkhannock, Pa 18657. Interment will be in Sunnyside Cemetery Tunkhannock. A viewing will be held on Thursday from 12:00 PM until the time of the service. Memorial donations can be made to the Order of the Eastern Star 126 South Street Masonic Hall Waymart, PA 18472. For directions and on line condolences please visit www.sheldonkukuchkafuneralhome.com.

To order memorial trees or send flowers to the family in memory of Lois A. VanHorn, please visit our flower store.

Order of the Eastern Star