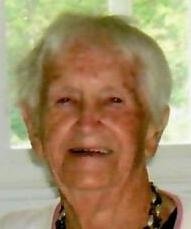 Lola M. Remington of Tunkhannock died Saturday in The Gardens, assisted living facility, in Tunkhannock were she had been a guest since December 2015.

She was born in Laceyville on July 24, 1924 daughter of the late James Arthur and Florence Brown Tinna. She had worked at various local restaurants, worked at a McGregor factory in Newton NJ for a number of years. One of her memorable moments was working at a factory in support of America’ WWll military efforts

Funeral services will be held on Tuesday at 2 pm from the Sheldon-Kukuchka Funeral Home Inc., 73 W. Tioga St. Tunkhannock. Interment will be in Sunnyside Cemetery, Tunkhannock. Visitation will be from 12 noon until time of service.

To order memorial trees or send flowers to the family in memory of Lola M. Remington, please visit our flower store.