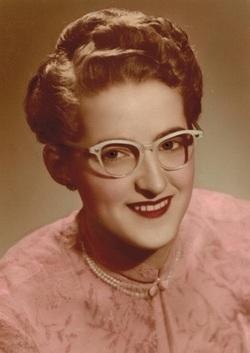 Louise R. Lewis of Forkston died Wednesday May 7th 2014 at the home of her son and daughter in law Wayne and Susan Lewis of Falls. She was born in Falls on July 17, 1929 daughter of the late Albert and Frema Mae Clark Sickler. Prior to her retirement she was employed as a head cashier at WT Grants, Woolworths in Pittston, Ranson Nursing Home and as a Home Health Nurse. Louise was preceded in death by a son Mark Lewis, sisters Martha Lasher, Betty Jones, Alberta Smith and Lois Dornblazer. Surviving is her husband of 62 years, Herman Lewis, son and daughter in law Wayne and Susan Lewis of Falls, daughter and son in law Marsha and Ted Grohoski of Plymouth, sister Elise Ramage of Tunkhannock, grandchildren Katie Traher, Kevin Lewis, Heather Thurston, Ryan Campbell, Cassandra Grohoski, and Eric Lewis, great grandchildren, Nolan and Andy Thurston and Adalynn Traher and Isabella Renee Lewis. Memorial services will be held on Monday evening at 7 pm from the Sheldon-Kukuchka Funeral Home Inc., 73 W. Tioga St. in Tunkhannock with Pastor Michael Baumgardner of the Lake Winola United Methodist Church. Family will receive friends at the funeral home on Monday evening from 5 to 7. Those wishing may make memorial contributions to Hospice of the Sacred Heart, 600 Baltimore Dr., Wilkes-Barre, Pa. 18702. On line condolences may be sent to the family at www.sheldonkukuchkafuneralhome.com
To order memorial trees or send flowers to the family in memory of Louise R. Lewis, please visit our flower store.