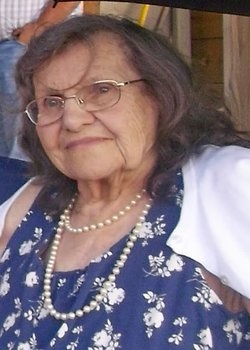 Mabel V. Evans “Grams,” 89, went to eternal rest on March 12, 2013, one day before her 90th birthday, at home in Tunkhannock, Pennsylvania from complications due to mesothelioma. Mabel was born March 13, 1923 to parents John Lockett and Gertrude VanVoser, and was a resident of Newtown, Pennsylvania prior to retiring to her home in Tunkhannock, Pennsylvania. She was married to the late Hayden Evans for 53 years. Mabel lived in Newton, Pennsylvania for many years and graduated from Newton High School. She enjoyed cooking, reading, and riding motorcycles. Preceding retirement, Mabel was a cook at Friends Boarding Home in Newton, PA for many years. Following retirement, Mabel enjoyed tending to her garden and flowers at the farm house she and her husband purchased in 1979 and pridefully worked to restore for many years. Her farm house was very special to her and she enjoyed many years there with her husband. Mabel will be remembered by friends, family, and co-workers for her cooking skills, hospitality, and mentorship. She brought many smiles to people’s faces with her cheery disposition. Mabel also had compassion for all animals and a great respect for nature. Besides her husband and parents, Mabel was preceded in death by a son, Hayden Evans, Jr. who passed in 1948 and a daughter, Grace E. Evans, who passed in 2001. In addition to her children, she was preceded in death by a sister, Ethel Farruggio in 2005 and a brother, John J. Lockett, Jr. in 2012. She is survived by two sons, James Evans (PA) and Richard C. Evans (PA) and a daughter, Linda Evans (PA). She is survived by brothers, Robert Lockett (Carol) and Charles Lockett (Janice) and sisters, Gertrude Randall and Alice (Bob) Kahn. She is also survived by her dog Missy, who she had a tendency to spoil and share her meals with. Mabel is survived by grandsons, Richard Bowker (AK), Richard Evans (PA), and granddaughters, Jennifer Evans (Pennsylvania), Janine Deemer (PA), and Jacqueline C. Kelly (PA) along with several nieces, nephews, and great-grandchildren. Family and friends would like to thank Ardee’s and the local residents of Falls, PA who always made her feel special and welcome, and the Hospice of Scranton for the compassionate care they provided. Mabel was especially grateful for her granddaughter Jacqueline who lived with her and cared for her for the last 5 years. Friends and family may call from 1 to 2 p.m. on Sunday, March 24th with a memorial service immediately following at Sheldon-Kukuchka Funeral Home of 73 West Tioga Street in Tunkhannock, Pennsylvania 18615.
To order memorial trees or send flowers to the family in memory of Mabel V. Evans, please visit our flower store.