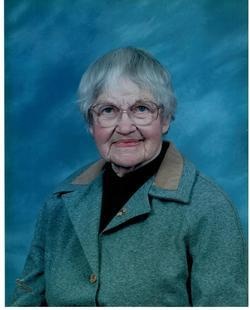 Mary Allegra Sturdevant of Marcy Rd, Tunkhannock died Monday May 6th at Tyler Memorial Hospital in Tunkhannock. She was born on November 30, 1921 in Riverside Hospital, Wilkes-Barre daughter of the late Fred G and Eleanor Gay Northrup. Mary Allegra attended the Mehoopany Grade School and graduated from Tunkhannock High School in 1939. She then attended and graduated from Wilkes-Barre General Hospital School of Nursing as a Registered Nurse. She spent most of her nursing career at Tyler Memorial Hospital both in Meshoppen and Tunkhannock until she retired. She also did private duty nursing. She maintained her nursing license through 2006. She was a long time member of the American Red Cross, and worked at the very first blood drive that was ever held in Wyoming County as well as numerous blood drives over the years. Allegra was a member of the Red Cross Disaster Action team and worked at many shelters that were set up in Tunkhannock as a result of the tornado and several floods. She was a member of the Tunkhannock United Methodist Church, a trustee of the Union Hill Cemetery Association, Mehoopany, a member of the Nature Conservancy at Vosburg and the Audubon Society, a member of the Tunkhannock Senior Center and also a volunteer at the Seven Loaves Soup Kitchen. She was a faithful participant of The Silver Sneakers exercise program, the Yoga program and the Tai Chie program at the Riverside Gym. She enjoyed her Sunday afternoons listening to Blue Grass Music at the Sky Haven Airport and at the Old Lynn Church Concert Series. She made friends wherever she went. Mary Allegra loved traveling and had made several trips to Alaska. She enjoyed the outdoors, wildlife and gardening and was known for her gladiolas and dahlias. She enjoyed dancing and square dancing. Mary Allegra was a devoted Mother, Grandmother, and Great-grandmother. She will be greatly missed by her family. She was preceded in death by her husband of 44 years Ralph D. Sturdevant, father Fred G. Northrup, mother Eleanor Gay Northrup, brother James Northup and brother-in-law Elwyn Sturdevant. Mary Allegra is survived by her son David and wife Leona Sturdevant of Tunkhannock, daughter Eleanor “Ellie” and husband Margin Stout of Tunkhannock, and sons Lyle and wife Grace Sturdevant of Mehoopany and Eliot Sturdevant of Clarks Summit; grandchildren Amy Youells Poage and husband James of Fairbanks, Alaska, Nichole Sturdevant Kwiatkowski of Scranton, Heidi Sturdevant of Jessup, Schuyler Sturdevant of State College and Gemma Sturdevant of Clarks Summit. Sister-in-law Thelma Sturdevant Wilson, 3 great-grandchildren and 2 nephews. Funeral Services will be held on Friday May 10th at 11 am from the Tunkhannock United Methodist Church with Pastor Peter Geschwindner presiding. Interment will be in Union Hill Cemetery in Mehoopany. Friends may call at Sheldon-Kukuchka Funeral Home, 73 W. Tioga St., Tunkhannock, PA on Thursday evening from 5 – 8 pm. In lieu of flowers, memorial donations may be made to The Tunkhannock United Methodist Church Memorial Fund, PO Box 447 Tunkhannock, PA 18657, the Wyoming County Red Cross, 819 SR 29 South, Ste 2, Tunkhannock, PA 18657, or the Nature Conservancy, 2101 North Front St., Bldg. #1 Ste 200, Harrisburg, PA 17110. Online condolences may be sent to the family at www.sheldonkukuchkafuneralhome.com.
To order memorial trees or send flowers to the family in memory of Mary Allegra Sturdevant, please visit our flower store.