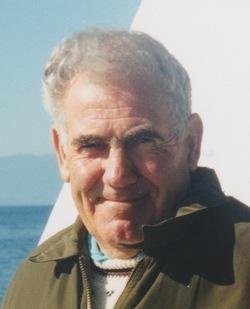 Michael James Wheel, age 85, of Tunkhannock, formerly of Laceyville, died on December 29, 2015 at Harvey’s Lake, Pennsylvania. His wife Beryl Stonell Wheel, to whom he was married for 61 years, survives him. Michael was born in Woodford, England on September 2, 1930. He was the son of the late Joseph James Wheel and Mary Smart of Buckhurst Hill, England. Many members of Michael’s family worked in the home construction industry in England, and Michael left school as a teenager to work as a homebuilder with his father. Michael served in the British Army from 1949 to 1952, and was stationed in Germany. He attended Walthamstow Technical College in Northeast London to study drafting and construction and became a skilled bricklayer, stonemason, and carpenter. In 1972, Michael and his immediate family moved to the United States and lived in the Laceyville area. Michael was preceded in death by his daughter Susan Wheel and sister Peggy Wheel. He is survived by son Graham Wheel and daughter-in-law Judy of Bellevue, Washington; and by grandson Derek Wheel of Kirkland, Washington. Arrangements by Sheldon-Kukuchka Funeral Home, Inc. 73 West Tioga St. Tunkhannock, PA.
To order memorial trees or send flowers to the family in memory of Michael J. Wheel, please visit our flower store.