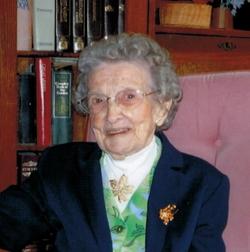 Millie I. Crawford Millie Isabel Harvey Crawford of Georgetown, TX formerly of Lake Carey died Wednesday at the home of her daughter and son in law Janet and Thomas Nelson of Georgetown. Millie was born February 17, 1915 in Marcy, Tunkhannock Twp. Wyoming county daughter of the late Ross and Bessie Milhime Harvey. Prior to her retirement she worked as the Assistant Chief Clerk for Wyoming County for over 34 years. A member to the Tunkhannock Baptist Church where she taught Sunday School and was a Youth Leader for many years. In addition to her parents she was preceded in death by brothers Stirel Harvey and Ross Harvey Jr. Also surviving in addition to her daughter is a daughter Barbara and Clinton Closs of East Aurora, NY, sister Edith James of Fairfield, NJ, grandchildren Tom and Amy Nelson, Round Rock, TX, Todd and Patty Nelson, Cedar Park, TX., Rochelle and Ed Fitzpatrick, East Aurora, NY, Amy and Chris Tedesco, Hamburg, NY, great grandchildren Andrew and Lizzy Nelson, Austin, TX; Peter Nelson, Round Rock; TX, Charlotte, Luke and Cade Nelson, Cedar Park, TX;, Alicia, Ashley, Autumn, and Anna Fitzpatrick, East Aurora, NY. A very special, nephew and his wife, Clyde and Betty Harvey, Tunkhannock and several other Nieces and Nephews. Funeral services will be held on Friday, September 13th at 2 pm from the Sheldon-Kukuchka Funeral Home Inc., 73 W. Tioga St., Tunkhannock with Mr. William Noble of the Tunkhannock Baptist Church, Interment will be in Sunnyside Cemetery, Tunkhannock. Friends may call at the funeral home from 12 noon until the time of service. In lieu of flowers memorial contributions may be made to Milwood Baptist Church AWANA Clubs % Tom Nelson, 3303 Stonewall Drive, Round Rock, TX 78681. On line condolences may be sent to the family at www.sheldonkukuchkafuneralhome.com.
To order memorial trees or send flowers to the family in memory of Millie Crawford, please visit our flower store.