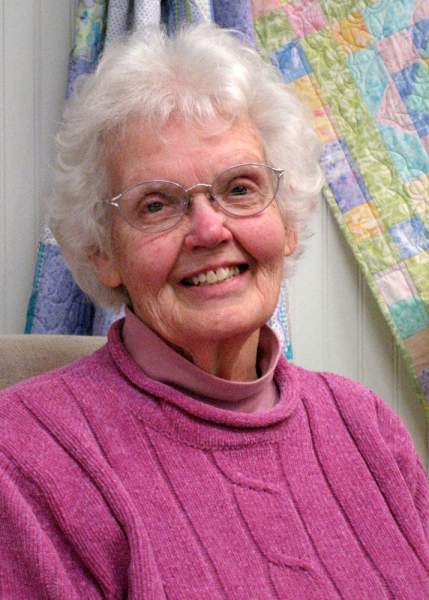 Nancy L. Davis Goeringer of Tunkhannock, PA passed peacefully at home on Thursday, February 11. She was born December 8, 1930, in Wilkes-Barre, the daughter of the late Dan B. and Mildred Tripp Space Davis. She grew up in Kingston and attended Wyoming Seminary until 1947 when her family moved to Hopewell, NJ. She graduated from Princeton High School in 1948. She was a graduate of New Jersey College for Women, now Douglass College (Rutgers University). She was married to Raymond C. Goeringer in 1952 and resided at Lake Louise Farm, Franklin Township, until 1972 when they moved the family’s dairy farm to Tunkhannock. Nancy was a Home Economics teacher at Dallas High School for 30 years. In 1981, she was a Merit Finalist for the PA Home Economics Teacher of the Year Award. Nancy initiated the award-winning, student run, Pre-School Child Development program and Vocational Food Service curriculum at the high school. She retired in 1993 and is remembered fondly by many students and children who passed through her programs. Nancy enjoyed homemaking, sewing, and needlecraft all her life. She played a significant role in Airing of the Quilts, the popular outdoor quilt show created by her daughter and attended by thousands of visitors to Tunkhannock every autumn from 2002-2014. She enjoyed flower gardening, watching the seasons pass along the Susquehanna River, and caring for the beautiful oak tree which graces her front yard. She was preceded in death by a son, Raymond, Jr. in 1974 and her husband of 56 years who passed in 2008. She was the youngest of five children who all preceded her in death: sisters Betty Bowen and Dorothy Budinger, and brothers Fred, Daniel, and Richard Davis. She is survived by three daughters, all residing in Tunkhannock, Jeannette Kitlan, Leslie Rhoades (John), and Kathy with whom she lived. Four grandchildren Sarah Scranta (Bernie Jr.), Michael Kitlan III (Chrissy), Becky Kitlan, Mary Kitlan, great grandchild Hannah Scranta, and many nieces and nephews. Viewing will be conducted Monday, February 15th from the Sheldon-Kukuchka Funeral Home 73 W. Tioga St., Tunkhannock, PA. Friends may call from 4 – 7 pm followed by a memorial service at 7 p.m. with Pastor John Shaffer officiating. Interment will be at the Overfield Cemetery in Meshoppen on Tuesday, February 16th at 3 p.m with Pastor Shaffer presiding. Memorial contributions can be made in Nancy’s name to the Tunkhannock Public Library, 220 W. Tioga St. Tunkhannock, PA 18657. Monday February 15, 2016, 7 pm at Sheldon-Kukuchka Funeral Home Click for Map and Directions Monday February 15, 2016, 4 pm - 7 pm at Sheldon-Kukuchka Funeral Home Click for Map and Directions
To order memorial trees or send flowers to the family in memory of Nancy L. Goeringer, please visit our flower store.