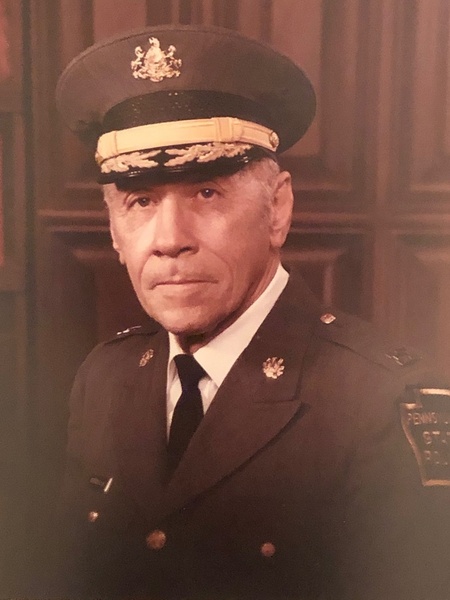 Nicholas Kordilla of Tunkhannock passed away on Tuesday, December 3, 2019 at Clarks Summit Senior Living, Clarks Summit, PA. He was born in Nesquehoning, PA on October 31, 1926 and was the son of late Nicholas and Ella Starry Kordilla.

He enlisted in the Pennsylvania State Police in June of 1949.  He was stationed at various troops throughout PA including Troop P in Wyoming and Troop H in Harrisburg. Nicholas was promoted to Corporal in 1964, Sergeant in 1968 and Lieutenant in 1970.  In 1972 he made Captain and was assigned as Commanding Officer of Troop R in Dunmore. In 1979 he assumed command of Troop P in Wyoming. He retired from the Pennsylvania State Police in July of 1985.

After retiring from the Pennsylvania State Police, he became Corporate Security Director for Jerry’s Sport Center in Forest City, PA. He retired in 2008.

Nicholas was an avid hunter and fisherman. He enjoyed many of those activities with his 2 sons- in- law. He loved spending time with his family and was a strong supporter and very proud of the academic accomplishments of his 2 granddaughters.

He was preceded in death by Sisters Ann Petrash and Vilma Kokolus and brothers Michael, William and John.

To order memorial trees or send flowers to the family in memory of Nicholas Kordilla, please visit our flower store.