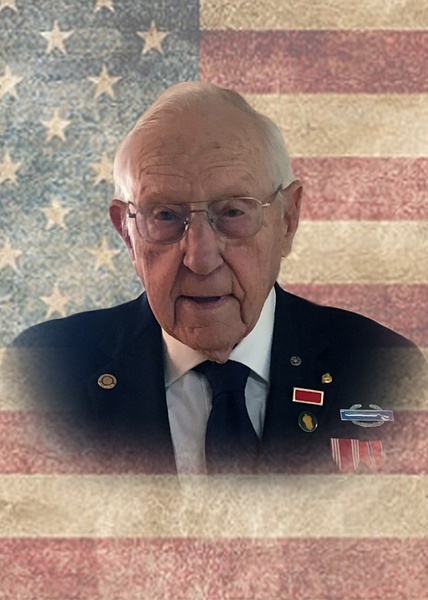 Norman A. Werkheiser of Tunkhannock passed away Tuesday January 11, 2022 at the age of 95. Born March 20, 1926 in Nazareth, Pa. to Robert And Pearl (Keiper ) Werkheiser, and was the third youngest of 17 children. Norman was a member of the Tunkhannock United Methodist Church, Dennis Strong Legion Post 457, Triton Hose Company and a past President of the Tunkhannock Rotary. And let’s not forget the morning coffee group at Curry Donut where he claimed to be the oldest member and maybe even president. Of all his life accomplishments, he was most proud to have served his country in World War II. In 1944 he was taken out of boot camp and sent to serve under the command of General George H Patton at the battle of the bulge, where he earned the prestigious Bronze Star for heroic achievement. A member of Company L, 345th regiment, 87th division of the Golden Acorns, Norman was one of many who crossed the Rhine River on 7 March, 1945, which was a major turning point in the war effort. Corporal Norman A Werkheiser was honorably discharged on 6 June, 1946. He was also presented with the good conduct medal, combat infantry badge, and meritorious unit commendation. Norman encompassed a life that should be the model for how others should strive to live. He was a devoted husband, a family man, hard worker and always found time to serve his community. And while doing all those things he still made time to make everyone around him laugh and smile. Anyone who has ever met Norman has had wonderful things to say about him and his amazing sense of humor. Norman enjoyed family time and one of his greatest joys was spending time camping on the St. Lawrence with family and fishing with son, grandsons and best buddy George Brick. After retiring from Sire Power as lab manager, he continued his career, which led to a third generation business now known as Keystone Truck Caps. Following his second retirement you would find him in his wood shop daily making anything from clocks to wagons to cider presses to special family requests. He was preceded in death by Wife Evelyn (Laubach), and daughter Sally Mingos He is survived by one brother, Marvin; sister in law, Lucille Laubach; daughter, Karen Tague; son, Glen Werkheiser (Judy); son in law, John Mingos; grandchildren, Jeff (Jill) Tague, Jason (Stephanie) Tague, Melissa (Michael) McCabe, Rachel Mingos, Aaron (Becky) Werkheiser, Ryan (Kristine) Werkheiser, Jessica Lee; fourteen, great grandchildren; one great great granddaughter. Family and friends are invited to attend Norm's celebration of life service which will be held on Saturday April 23, 2022 at 11:00 from the Tunkhannock United Methodist Church, 4 Church St. Tunkhannock, PA 18657. Interment with full military honors will follow in Sunnyside Cemetery, Tunkhannock. A luncheon will be held at the Methodist Gathering Place immediately following the services. Arrangements and care entrusted to Sheldon-Kukuchka Funeral Home, Inc. 73 W. Tioga St. Tunkhannock, PA 18657. In lieu of flowers, Donations in Normans name can be made to The Seven Loaves Soup Kitchen. Or Interfaith Friends.
To order memorial trees or send flowers to the family in memory of Norman Werkheiser, please visit our flower store.