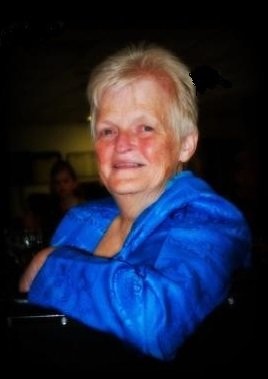 Jean Salsman of Mehoopany, formerly of Auburn Center, passed away August 23, 2015 at Meadowview Senior Living Center in Montrose. She was surrounded by her loved ones. She was preceded in death by her husband David Salsman Sr. She was born on November 28, 1945 in Springville PA daughter of the late father Walter Evans and mother Ruby Robinson. Through her faith in the lord and the love of him and her family and friends, she gained the strength and courage to fight a long hard battle with cancer. Jean was a very talented artist, whose paintings are in many area homes. She loved to sew, crochet, bake and craft. She was an avid gardener and loved mowing her lawn. Her greatest love was spending time with her family and friends. She hosted holiday meals for family, friends and anyone else who was brave enough to join her noisy, large, fun loving crowd. Jean was inspired by Robin Roberts to never give up hoped and to fight to the end. Ms. Roberts took the time to meet with her and share their stories of hope, love and family. She was blessed to have multiple caregivers who watched over her and a couple who became her dear friends, Judy Strohl and Sherry Macialek. She will be greatly missed by all who have shared her life. She was preceded in death by her brother Dan Robinson, step daughter Darlene Salsman, and grandchildren Daniel Mosier and Nancy Kingston. She is survived by her children; son and daughter-in-law Walt and Luci Askew, daughters and sons-in-law, Judy and Dale Kingston, Tammy and Ted Daniels, Lynn and Tom Grippo, Chrissy Harvey and Wayne Youells, Carrie Myers and Bruce Stankus, April and Mike Jayne. Stepsons and daughters-in-law Kevin and Marylou Salsman, Kelvin and Janice Salsman and David and Linda Salsman; stepdaughter Bonnie Richards. She is also survived by her loving father, James R. Robinson, brothers and sisters-in-law Jay and Alice Robinson, Brad and Lizz Robinson and sister Patsy Robinson, 26 grandchildren and 24 great-grandchildren, her lifelong best friend (like a sister) Kaye Vanderbilt, her special cousin Bert Krimmel and her faithful, furry companion Rita. Funeral services will be held at 11:00 am on Wednesday August 26th from the Sheldon-Kukuchka Funeral Home, 73 W. Tioga St., Tunkhannock. Interment will be in Vaughn Center, Mehoopany. The family will accept visitors from 6 – 8 pm on Tuesday and again from 10 am until the time of the services on Wednesday. Memorial contributions may be made in Jean’s name to a charity of the donor’s choice. Online condolences may be sent to the family at www.sheldonkukuchkafuneralhome.com.
To order memorial trees or send flowers to the family in memory of Regina R. Salsman, please visit our flower store.