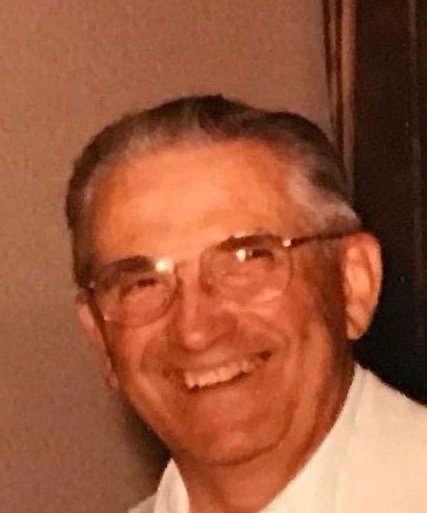 Beloved husband of 68 years to his devoted wife, Marion H. Daniel (Heimroth). Devoted father of Steven, his wife Janet, David, his wife Anne, Timothy, his wife Margo, Randy, and his wife Rocchina. Cherished grandfather of Denea, Sean and Stacey, Taryn, Lexie, Megan and Ryan, Brianna and Nicole. Dear great-grandfather to Haylie and Ethan, Justin and Aiden, and Casen. Loving uncle to many nieces and nephews.

Richard was born June 24, 1928 in Elizabeth N.J. He was the son of the late Frank and Louise Daniel (Union, NJ)

Richard enlisted in the Navy at the end of World War II, earning the American Area Campaign Medal, World War II Victory Medal, Good Conduct Medal and Navy Occupation Medal. Richard was honorably discharged May 9, 1949 and reenlisted in 1950 for the Korean War.

Richard met and married the love of his life, Marion H. Heimroth on September 2, 1950 by the Reverend James J. Richards in Union N.J.

Richard worked in banking all his life, retiring as the Executive Vice President of the Roxbury State Bank in1988. In retirement, he moved with his wife to their beloved home on the Susquehanna River. Richard always had time for family and friends being well liked by everyone he touched. He was a selfless and giving man donating his time as an Auxiliary Police Officer, First Aid Responder, and Volunteer Fire Fighter in East Hanover, NJ. He enjoyed helping others and one of his last charitable duties that he so treasured was helping to keep the financial records for not only his good friend, but Reverend, Dr. Donald Drewett of the Tunkhannock Presbyterian Church. Richard will be sorely missed by all. He had a wonderful life full of love and laughter with his wife by his side.

We’ll miss you, Dad, along with your contagious smile. We will never forget you and will forever be BLESSED BY THE FOUNDATION THAT YOU HAVE CREATED FOR OUR FAMILIES. WE LOVE YOU.

A Memorial Service will be held at 11:00 AM on June 30, 2018 at the Tunkhannock Presbyterian Church, 51Putnam St. Tunkhannock PA with a gathering from 10:00AM until the time of the service, followed by a luncheon at the Church.

In lieu of flowers the family requests that donations may be made to:

To order memorial trees or send flowers to the family in memory of Richard F. Daniel, please visit our flower store.