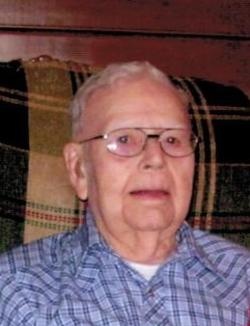 Richard H. Holton of Tunkhannock passed away Sunday evening in Geisinger Community Medical Center Hospice Unit. He was born in Tunkhannock, May 31, 1921 son of the late Edward Haulton and Alice Baker Holton. Dick was a 1939 graduate of Tunkhannock High School; a proud Navy veteran of World War II, and prior to his retirement in 1983 had been employed for 42 years as a communications installer for Western Electric/Bell Telephone. He was a member of the Triton Hose Company, former member of the Tunkhannock Moose Lodge, a charter member of the Fraternal Order of the Eagles, Tunkhannock, VFW Post 769 and the Dennis Strong American Legion Post 457 and the Communications Workers of America. He attended the Tunkhannock United Methodist Church. Dick was known to all as “Shorty” and when asked how he was doing he always responded “Terrible, but thanks for asking”. He was a loving father and grandfather and always enjoyed the large gatherings with his family and friends. He was preceded in death by his wife of 56 years Elizabeth Larkin Holton, son Robert Holton, and grandson John W. Evans. Surviving is a son Charles and wife Mickey Holton of Tunkhannock, daughters Linda and husband William Evans of Wilkes-Barre, Beverly and husband Richard James of Dallas, Mary Alice and husband James Osterhout of Tunkhannock, Jennifer Very of Nicholson and daughter in law Cindy Holton of Tunkhannock; 10 grandchildren 13 great grandchildren and several cousins. A great granddaughter is expected in August. Funeral services will be held on Thursday at 11 am from the Sheldon-Kukuchka Funeral Home Inc., 73 W. Tioga St., Tunkhannock with Pastor Peter Geschwindner. Interment will be in Sunnyside Cemetery Tunkhannock. Friends may call at the funeral home on Wednesday from 4 to 7 pm. On line condolences may be sent to the family at www.sheldonkukuchkafuneralhome.com.
To order memorial trees or send flowers to the family in memory of Richard H. Holton, please visit our flower store.