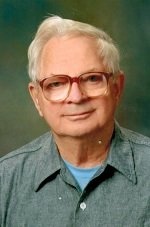 Robert H. Hahn Jr. of Tunkhannock died Sunday in the Golden Living Center in Tunkhannock. He was born in Kingston on June 17, 1930 son of the late Robert H. and Ruth Weed Hahn. Bob as he was liked to be called was a 1948 graduate of Tunkhannock High School. He served in the US Army from 1949 to 1953 serving two seasons on the SS Brown with the Great Lakes Steamship Co. then joining the MSC- Military Sealift Commend in 1956. His first assignment was on the USNS Taylor and his last assignment was a fuel tanker Truckee. He retired in 1986 from MSC and returned to his home in Tunkhannock. Bob enjoyed music and was a self-taught musician. He loved playing the piano for family and friends. He was a faithful member to the Tunkhannock United Methodist Church and a member of Dennis Strong Post 457in Tunkhannock. He was preceded in death by his sister and brother in law Ainee Hahn Walsh and husband Rev. Horace Walsh. Surviving is cousins Sharon Weed Jones and husband John of Dallas, Pa., Charles Weed and wife Karen of West Pittston and his pet cat Priscilla. Special thanks to his longtime neighbors, Reynold and Carol Lackey for their kindness to Bob and his physician Dr. John Gardner. He will be greatly missed by all who knew and loved him. Funeral services will be held on Tuesday a 3 pm from the Sheldon –Kukuchka Funeral Home Inc. 73 W. Tioga St. Tunkhannock. Interment will be in Mt. Zion Cemetery. Friends may call at the funeral home 2 pm until the time of service.
To order memorial trees or send flowers to the family in memory of Robert H. Hahn, please visit our flower store.