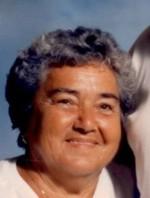 Rosa Bettio Kubilus of Factoryville, formerly of Dickson City died Friday in the Lackawanna County Health Care Center in Peckville. She was born in Augsburg, Germany on April 22, 1929 daughter of the late Anton and Maria Sailer Bettio Prior to her retirement she was active in the Lackawanna County 4-H program and when her children were younger she served as President of the Mid-Valley School District PTA and was active in the Mid -Valley Band Boosters. She was a loving Mother, Grandmother and enjoyed cooking and sewing. She was preceded in death by brothers Anton and Maxamillion Bettio and a sister Maria Bettio. Surviving is her husband of 58 years Louis W. Kubilus, sons Max Bettio of Harrisburg, Walter Kubilus of Moosic, Thomas Kubilus of Throop, Anthony Kubilus of Carbondale, Louis Kubilus , Jr of Chandler, Az., daughter Maria Thorne of Tunkhannock, 11 grandchildren and 5 Great grandchildren. A memorial service will be held on Wednesday, November 12 at 4 PM from St. Peters Episcopal Church in Tunkhannock with Rev. Vivian Bennett, of St. Peters Episcopal Church officiating. Friends may call at the Church from 3 pm until the time service. In lieu of flowers memorial contributions may be made to the Alzheimerâ€™s Association
To order memorial trees or send flowers to the family in memory of Rosa Kubilus, please visit our flower store.