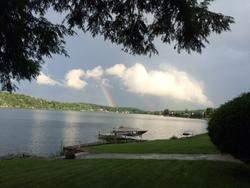 Sara R. Willoughby (née Bierly), long-time resident of Lake Carey, died on Wednesday the 17th of June at the Golden Living Center in Tunkhannock. Born in 1937 in Pittston, she was the daughter of the late Rufus and Clara Bierly Sally attended Wyoming Seminary in Kingston, Simmons College in Boston, and received her Bachelor’s degree in Education from the University of Michigan. Sally worked tirelessly for the Cystic Fibrosis Foundation for many years, and was involved with numerous conservation and ecological causes on the local and national level. She loved Lake Carey, sharing her home there with family and friends, and was a life-long member of the First United Presbyterian Church of West Pittston. She was preceded in death by a son James. Sally is survived by her friend and companion, Alan Flanagan; her sons, John and his wife Amy of Reno; and Robert and his wife Candice of New York City. She also leaves five granddaughters: Molly, Jessie, Penny, Kirby, and Quinn; her brother Louis Bierly and his wife Lynne; her three nephews Paul, Daniel, and Thomas Bierly; and her daughter-in-law Jaci Willoughby and Jaci's son John Armstrong. Memorial services will be held at a later date. Memorial gifts may be made to the Cystic Fibrosis Foundation (http://www.cff.org). The Sheldon Kukuchka Funeral Home, 73 W. Tioga St., Tunkhannock, PA has been entrusted with the memorial arrangements. Online condolences may be sent to the family at www.sheldonkukuchkafuneralhome.com.
To order memorial trees or send flowers to the family in memory of Sara R. Willoughby, please visit our flower store.