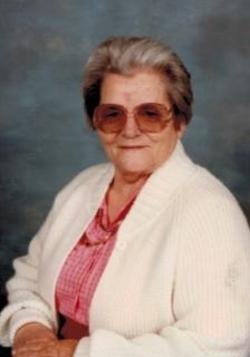 Sarah E. Howell of Tunkhannock died Sunday April 14th at the Golden Living Center in Tunkhannock. She was born in Northmoreland Twp Wyoming County on December 12, 1918, daughter of the late George and Minnie Weaver Hicks Crone. She was a member of the Osterhout Bible Church, the Wyoming County Senior Citizens, and the Children’s Evangelist Fellowship of Wyoming County. Sarah was an avid sports fan but particularly enjoyed watching baseball. She was preceded in death by her husband Francis W. Howell and several brothers and sisters. Surviving are sons Arthur of Mason MI, Francis of Mehoopany, Phillip of Forkston, daughter Iva Harvey of Factoryville, Janet Howell and Darlene Marshall both of Tunkhannock, sister Ada Harvey of Tunkhannock and sister-in-law Alice Bishop of Springville, 14 grandchildren 18 great-grandchildren, and 4 great great-grandchildren. Funeral services will be held on Friday at 10 am from the Sheldon-Kukuchka Funeral Home, 73 W. Tioga St. Tunkhannock with Pastor Brian Williams of the Osterhout Bible Church. Interment will be in Sunnyside Cemetery Tunkhannock. Friends may call at the Funeral Home on Thursday evening from 6 – 8 pm. Those wishing may make memorial contributions to the Osterhout Bible Church or to the Charity of their choice. Online condolences may be sent to www.sheldonkukuchkafuneralhome.com.
To order memorial trees or send flowers to the family in memory of Sarah E. Howell, please visit our flower store.