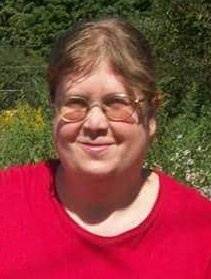 Sharon Mae Montross of Meshoppen died at her home on Thursday, September 21, 2017. She was born in Tunkhannock on February 28, 1970 daughter of Martha Strohl Montross of Tunkhannock and the late Wayne Montross.

Sharon was a 1988 graduate of Tunkhannock High School and had been employed by Staff Management  at the Procter and Gamble plant in Mehoopany. She enjoyed knitting, cooking and especially crocheting. She enjoyed playing with all of the children in her apartment complex.

In addition to her mother she is survived by a daughter Tammy Belcher, Wilkes-Barre, brother John and Kelly Montross, Pittsburgh, sister Carol Montross, Tunkhannock and granddaughter Sophia Smith.

A memorial service will be held on Sunday at 3 pm from the Sheldon-Kukuchka Funeral Home Inc., 73 W. Tioga St., Tunkhannock with Pastor Kurt Bricker of the Eaton Baptist Church . Family and friends will be received from 1 pm until the time of service.

To order memorial trees or send flowers to the family in memory of Sharon Mae Montross, please visit our flower store.