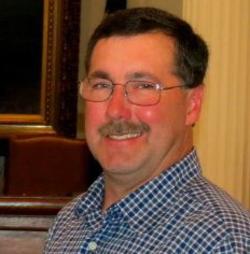 Terry C. Garrison 51, of Lemon died Wednesday evening at Geisinger Wyoming Valley Hospital surrounded by his family and some of his closest friends. He is survived by his wife of 8 years Julie Johnson Garrison. Terry was born in Meshoppen on October 12, 1962 son of the late Clark and Helen C. Lange Garrison. He was a 1981 graduate of the Tunkhannock High School, after school he continued to work on his family farm and started his own excavating business which he ran for 23 years. He started his business out by hauling sawdust to horse farms then through the years grew it into Garrison Excavating. He also was a bus contractor for the Tunkhannock School district. Terry was a kind hearted man that would do anything for anyone one of his many projects from helping build the horse barns at the Wyoming County Fairgrounds to helping during the flood to those in need; and was active with team penning. He loved spending time with friends and family and greatly appreciated the generosity of his closest friends during his illness. He is survived by his son Ben Garrison, of Tunkhannock, step daughter Paige Huscha and husband Anthony, of Montrose, sisters Cindy and husband George, of Maethuen, MA, Pam Eyer and husband Dick of Newville, PA, Kim Jennings, of Milton, PA, and Becky Williams and husband James of Clayton, NC, 1 grandson Nevin Husha, his mother-in-law Donna Johnson and several aunts, uncles, and cousins. Funeral services will be held on Tuesday October 29 at 11:00 AM from the Sheldon-Kukuchka Funeral Home Inc. 73 West Tioga Tunkhannock with Rev. George Stephens’s brother in law of Terry. Interment will be held in Sunnyside Cemetery. Friends and family may gather at the funeral home on Monday evening from 5:00 PM to 8:00 PM. Memorial contributions can be made to the Janet Weis Children’s Hospital in Danville 100 N. Academy Ave. Danville, PA 17822. For directions and on line condolences please visit www.sheldonkukuchkafuneral home.com.
To order memorial trees or send flowers to the family in memory of Terry C. Garrison, please visit our flower store.