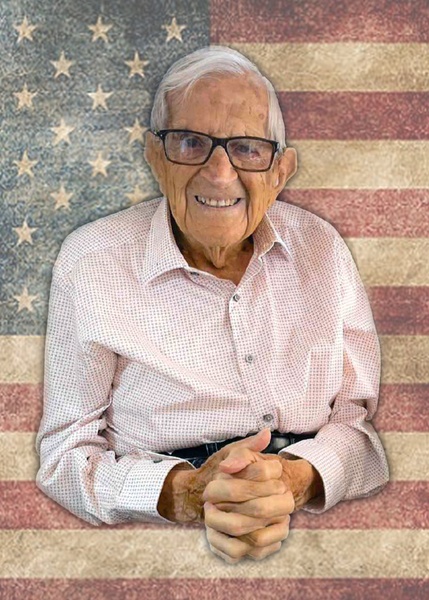 Theodore (Ted) Carpenetti, 105, of Gilroy California passed away on July 30, 2022 at home surrounded by his family. He was preceded in death by his wife Elise in 1999.

Born in Peckvillle on September 17, 1916 he is the son of the late Marino and Asunta Carpenetti.

Ted served in the United States Navy during World War II where he lost his brothers Edward and Leo in the war.

Ted left Nicholson, PA when he was 22 and began his life in California. He first worked in farming and restaurants, later settling in as the maintenance manager of all the parks for the city of Gilroy, CA. Ted met Elise and they married in 1943, settling in Gilroy.

He enjoyed working around his home and in his gardens. He and his wife loved to travel and enjoyed ballroom dancing with friends. Family was extremely important to Ted and Elsie.

After his wife's passing, Ted spent his time in their Gilroy home. He ate lunch with his friends at the senior center and spent much of his time with family and occasionally traveled back to Pennsylvania to see the rest of his family. In his final years, he was cared for by his nephew Albert Noble and wife Sheila living part time in Gilroy and in Pennsylvania.

Ted lived his life with kindness and grace. He found happiness in regular, everyday tasks of gardening and caring for his wife and their home. He welcomed all guests as family and always greeted everyone with a smile that had a twinkle in it. He was sweet and tender. He had compassion and empathy for others. He went out of his way to always lend a hand or hold a door. He was a gentleman and a gentle man.

He is survived by many nieces and nephews.

Services will be held at a later date.

To order memorial trees or send flowers to the family in memory of Theodore Carpenetti, please visit our flower store.