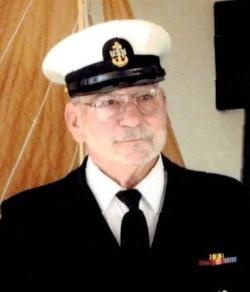 Thomas M. Owens Senior Chief Petty Officer USN Retired Tom Owens 74 died peacefully on April 12th surrounded by his loving family in Community Medical Center in Scranton. He is survived by his wife of 55 years Judy Dickinson Owens. They based their marriage on love, compassion and trust. He was the son of the late J. Philip and Helen Stuble Owens. He was a 1956 graduate of Tunkhannock High School, loved football and played on the 1955 undefeated Tunkhannock High School football team. He was a great competitor in all that he did and embraced life to the fullest. He entered the United States Navy in 1957 and after serving 20 years retired in 1976 as Senior Chief Petty Officer. Honor was his middle name until the end and he never met a stranger. He was a dedicated family member and in the 1960’s, while stationed in Georgia, was involved in scouting and his church and spent many hours teaching boys honor, responsibility and faith. He was a member of the Dennis Strong American Legion Post, member of the Nicholson Lodge F&AM #438 where he served as secretary for many years and was a 32nd degree mason. He was a long time member of Triton Hose Company and the Tunkhannock Moose Lodge. He was preceded in death by his youngest son Daniel, sister Nancy Owens, son-in-law Dwayne LaValley, and in-laws Nora and Clare Dickinson. In addition to his wife he is survived by his son Timothy of Wilkes-Barre, daughters Heather LaValley and Tami Owens both of Tunkhannock. Grandchildren Thomas and wife Melissa LaValley, Cody LaValley, Darren and wife Katie St Clair, Sadie and husband Brandon Adams, Olivia St Clair, Hayley Owens, Dagan Owens, Nathan and Nicholas Wilson, great-grandchildren Graycin and Kylee LaValley, Leana Cendona, Nora St Clair, and Owen Shylkofski. Brother William Owens of Texas and sister Kathy McConnell of Florida. Tom touched so many lives, helped so many people, and gave love with his whole heart. Our family has lost a hero but we will keep our faith in life because he taught us so well by word and example. Funeral services and veteran’s services will be held on Saturday at 2 pm from the Sheldon-Kukuchka Funeral Home, 73 W. Tioga St. Tunkhannock with Pastor Lori Robinson officiating. Family will receive friends at the funeral home on Friday from 4 – 6 pm and on Saturday from 1 pm until the time of the service. Masonic services by Nicholson Lodge #438 will be held on Friday at 6 pm. In lieu of flowers memorial contributions may be made in Tom’s name to the Disabled American Veterans, 516 Storrs St., Dickson City, PA 18519. Online condolences may be sent to the family at www.sheldonkukuchkafuneralhome.com.
To order memorial trees or send flowers to the family in memory of Thomas M Owens, please visit our flower store.