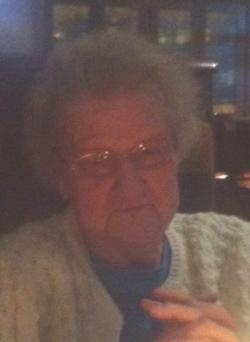 Violet Donowski, 90, of Tunkhannock formerly of Warrior Run Luzerne Co. died Thursday April 25, 2013 in the Golden Living Center Tunkhannock. She was born in Hanover, Luzerne Co. on December 9, 1922 daughter of the late Frank and Anna Kuprionus Kupinewicz . Violet traveled the world with her late husband Stanley W. Donowski as an Army wife as he served his country. She was a member of the Church of Nativity BVM in Tunkhannock. Surviving are her sons and daughter- in -laws Stanley and Diane Donowski, of Hope Mill, NC, David and Debra Donowski of Tunkhannock. daughter JoAnn Charles of Tunkhannock, Grandchildren John and Leigh Ann Charles, Jeffery and Robyn Charles, Brian Donowski, Christine Donowski, David and Daniel Donowski. Mass of Christian Burial will be held on Monday at 1 pm from the Church of the Nativity BVM in Tunkhannock. Interment will in Pieta Cemetery Tunkhannock. Friends may call at the Sheldon-Kukuchka Funeral Home Inc., 73 W, Tioga St. Tunkhannock on Sunday from 1 to 3. On line condolences may be sent to the family at www.sheldonkukuchkafuneralhome.com
To order memorial trees or send flowers to the family in memory of Violet Donowski, please visit our flower store.